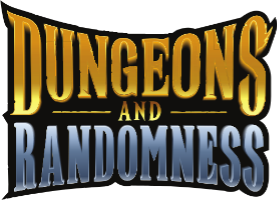 Dungeons and Randomness is the largest and most connected actual play “network” that I know of. I call them a network, because even though it is all the same dungeon master, set in the same world, all within the same timeline, D&R has a cast of nearly 20 players split across 3 different groups. The work that Jason does to keep everything organized and keep the timeline and story consistent across all of these groups is amazing.

Dungeons and Randomness is now on it’s second arc. The first arc was played using the 4th edition ruleset and lasted for their first 200 episodes before ending in an exciting and epic conclusion. If 200 episodes is a bit too much of a commitment to start out, they have a recap episode that goes over the major events that occurred, or you can jump right into their second arc. For Arc 2, the group has moved over to the 5th edition ruleset and jumped forward in time a little bit where some players reprise their original characters, while other decide to bring in a new character for the story.

Jason and all of D&R is a huge inspiration for me and the world of Erylia. It was while listening to D&R that I decided to begin work on my own world and take on the mantle of Dungeon Master. How much I enjoy listening to the show and craving more of the story is also what had given me the idea to turn my gaming session into a podcast for all of you to listen to.